The Storied Lineage of Emerald

As 2013 comes to an end, so does the reign of emerald as Pantone’s 2013 color of the year. Let’s take a look back at the deep history emerald has!

When Pantone, the leading authority on color, announced the bright, flattering emerald as the color of the year, we could not be any more excited!  A hue promoting change, renewal and clarity, emerald is a dazzling jewel tone that inspires insight and harmony, and is of course one of the most chic shades on the red carpet this year.  But, as the traditional birthstone for May, emerald has a long heritage associated with literature, legend and lore.  Some of the most famous pieces in history are emeralds, with daring stories to match.

Many of these elaborate emerald baubles are (luckily) on display for us to see, some in personal collections and some…lost to history.

This dazzling tiara was the center of attention last year when it went to auction and was sold to an anonymous buyer for $12.76 million.  Believed to have belonged to Eugenie, wife of French Emperor Napoleon III, the diamond and emerald tiara was originally commissioned for Katharina around 1900, the second wife of German prince Guido Henckel von Donnersmarck.  Composed of 11 rare Colombian emerald pear-shaped drops totaling over 500 carats, the emeralds may have graced the neck of a Maharajah before it was brought to Germany, where it was only worn whenever royalty was present. 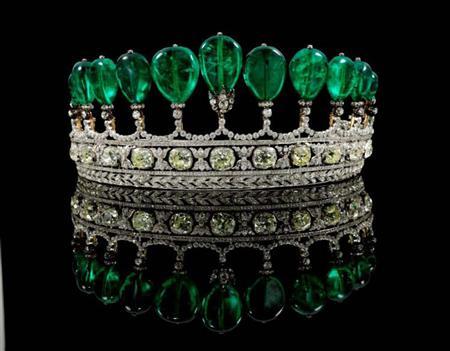 Mined in Columbia, the Mackay Emerald is the largest cut emerald in the National Gem Collection, set in platinum and surrounded by diamonds in an Art Deco style.  Given as wedding gift in 1931 from Clarence MacKay to his wife, Anna Case, the social scion of the New York Metropolitan Opera from 1909 to 1920, the emerald was cut to 167.97 carats and set with 35 smaller emeralds and 2,191 colorless brilliant and step-cut diamonds.  In 1984, Mrs. Anna Case Mackay bequeathed the necklace to the Smithsonian, where it has been on display in the Gem Hall at the National Museum of Natural History ever since. 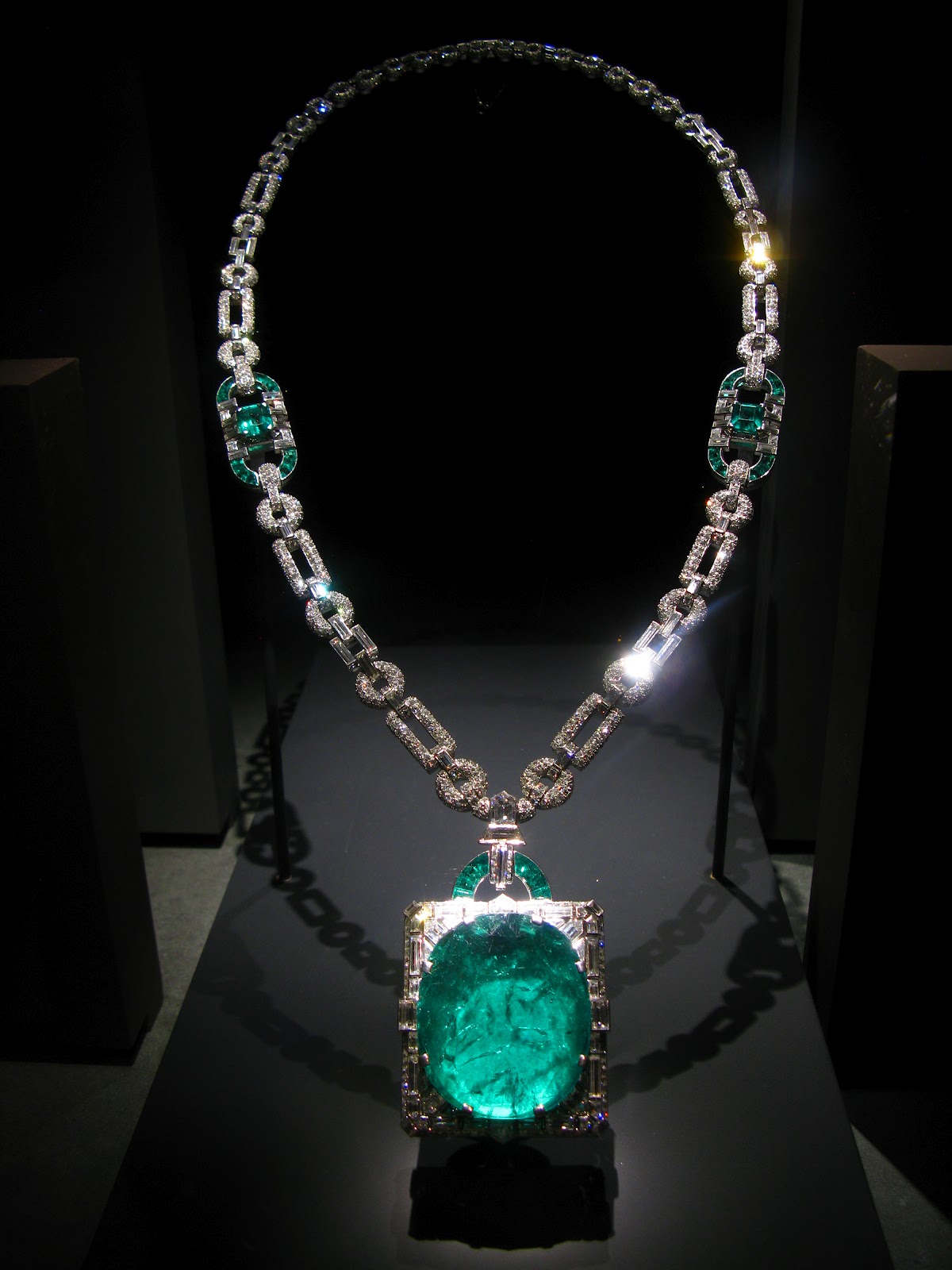 Weighing a total of 37.82 carats, the Chalk Emerald’s provenance makes it infinitely more valuable.  The emerald was in the personal collection of the royal rulers of Baroda State, a princely Indian state, and was the centerpiece of an emerald and diamond necklace worn by the Maharani Saheba, who passed the stone down to her son, the Maharajah.  In the 20thcentury, the stone was obtained by a New York jeweler who then crafted the emerald into a ring surrounded by 60 pear-shaped diamonds, totaling approximately 15 carats.  Donated by Mr. and Mrs. O. Roy Chalk, naming the emerald, the stone has been displayed in the Smithsonian Natural History Museum since 1972 as part of the National Gem and Mineral Collection. 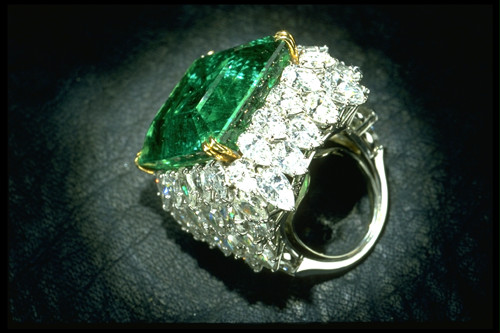 Although the Devonshire Emerald is one of the largest emeralds in history, it is also uncut and weighs 1,383.93 carats.  Originating from the mines of Muzo, Columbia, the emerald was either given or sold by Emperor Pedro I of Brazil to William Cavendish, 6th Duke of Devonshire in 1831, thus ensuring its name to history.  The emerald was placed on display at the Great Exhibition in London in 1851, and more recently at the Natural History Museum in 2007, located in the Vault. 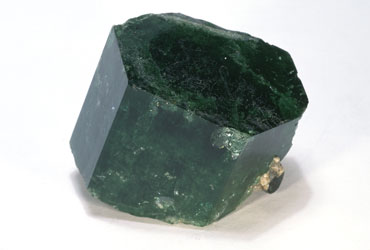 Made for Grand Duchess Vladimir, the aunt of the last Russian Tsar Nicholas II, the tiara was smuggled out of Russia during the Revolution by a British diplomat.  Sold by the Grand Duchess’s daughter, Princess Nicholas of Greece in 1921 to Queen Mary, the tiara was then adapted to accommodate 15 Cambridge emeralds as an alternative to the tiara’s original pearls.  The Queen of England was given the tiara from her grandmother, Queen Mary, in 1953. 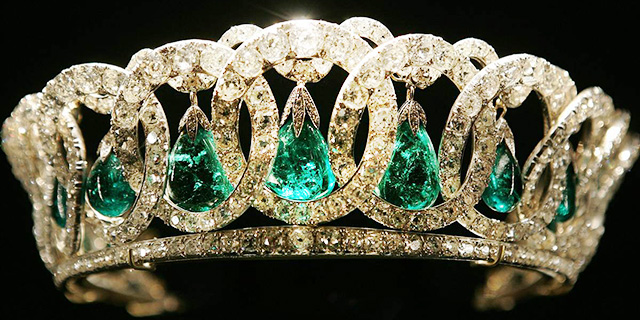 Made in 1845 by Joseph Kitching, the tiara was designed in the Gothic Revival style when Prince Albert presented the elaborate headpiece to Queen Victoria. Featuring upright cabochon emeralds atop a base of scrolls, the tiara was created to encircle the entire head, and later altered.  There are few photos of the tiara’s existence; one in a famous portrait entitled The Royal Family in 1846, portraying the Queen and her young family as she wore the tiara amongst other emerald jewels.  As the tiara was not designated as Crown property, the piece was passed down amongst her descendants but not with the main royal family. Victoria loaned the piece to her granddaughter Princess Victoria of Hesse and by Rhine in the 1880s, and later appeared again in 1960 to the State Opening of Parliament in 1960 by the then-Duchess of Fife, descended by Queen Victoria’s granddaughter Princess Louise.  Since then, the emerald tiara has not been seen, but has been reported as surviving “intact in the hands of a descendent of Queen Victoria.”