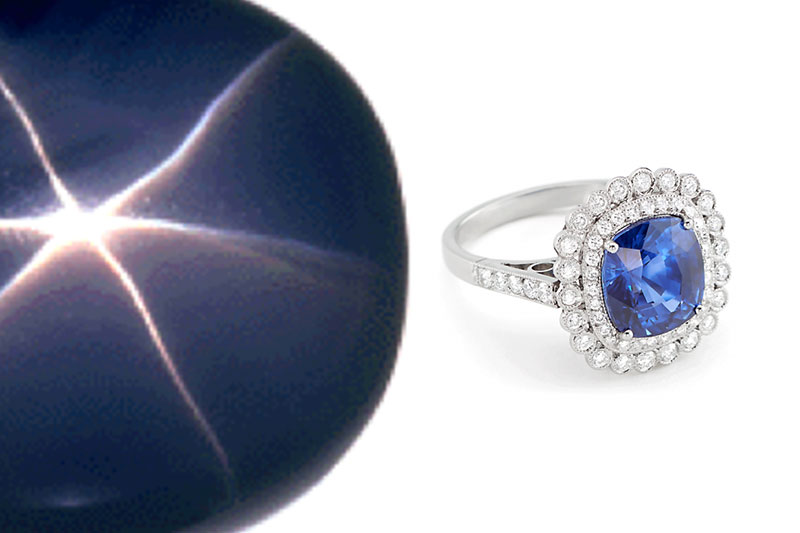 What Is A Sapphire: The Secrets of the Beloved Blue Gemstone.

The most common colored gemstone, sapphires are second to diamonds in popularity. Compared to the deep blue of the ocean, sapphires have an allure that has captivated people for thousands of years. Whether a personalized jewelry piece as a September birthstone necklace or a custom engagement ring, these gemstones are as romantic as they are beautiful.

And yet they are so much more than just blue stones…

Most sapphires are found in the eastern countries of Sri Lanka, Burma, Thailand, Cambodia, Madagascar, Tanzania, and Australia.  Montana is the only place in the United States where such gemstones are mined. Once, the Kashmir region of India/Pakistan was renowned for its famous Kashmir-blue Sapphire, but, unfortunately, very little is mined from there, today.

Sapphires are gemstones that can take millions of years to form. Similar to rubies in chemistry, they are formed out of a mineral called corundum (aluminum oxide). Unknown to many, blue is not the only color a sapphire can take on. Depending on the elements present during the sapphire’s formation, they can take on a rainbow of possibilities. So good news, September Birthdays! If blue isn’t your favorite color, you can wear your birthstone in the color of your preference.

Sapphire: A Gemstone Of Many Colors

Blue sapphires are formed when iron and titanium are present. These are the most popular and common of sapphires.

Pink and Red (ruby) sapphires form only when chromium alone is present. Of the sapphire colors, pink is the second most popular. However, pink sapphires are usually only found in small sizes and have inclusions, which can affect their clarity.

Yellow and Orange sapphires are made when iron and chromium are both present in the formation conditions. Yellow sapphires can be found in larger sizes and of high quality, so you can skip the canary colored diamond in favor for an equally impressive gemstone at a lower cost.

Pale Yellow and Green are only possible is iron alone in the environment of the sapphire’s formation. The curious thing about green sapphires is that, generally, they are the least valuable. However, large pure green sapphires are so rare that if they then become among the most valuable.

Violet and Purple form when an element called vanadium is present. Interestingly enough, these colors are often classified with pink sapphires.

Padparadscha is a unique color of sapphire that has a combination of both pink & orange hues. Due to their rarity, they are extremely valuable. Sapphires of this color traditionally come from Sri Lanka, but have been found in Madagascar and Tanzania as well.

One of the most incredible features about sapphires is that some even change color under different lighting!

Sapphires, like all other gemstones, vary in quality. Fine jewelers and jewelry stores, like the experts at any of the Hamilton locations, will be honest about the stone’s quality and help you make a confident decision. It’s still important, though, to understand how sapphires are graded so you can be an educated buyer when in the market.

Clarity plays a big role in diamond grading, but not so much in sapphires and other colored gemstones. Easily enough, if no inclusions can be seen with the naked eye (also called “eye-clean”), a sapphire is considered to have good quality clarity. If you can see inclusions (flaws/marks) with the naked eye, then it is a lower grade stone.

As with diamonds and other colored gemstones, a sapphire’s value will increase with carat size. Larger stones are more rare, so their price tag will jump with it.

A sapphire’s cut is how well a professional has made its surface proportionate and polished. The cut determines how well a sapphire reflects light and gives it maximum brilliance. A poor cut can cause light leakage, and make it appear dull. Simply put, the better the cut, the more brilliant and more expensive the sapphire will be.

At 563.35 carats, the Star of India has a unique star shape on both sides and is one of the largest sapphires in the world.

A gem for a royalty, Princess Diana’s engagement ring is now on the finger of Princess Kate Middleton, the future queen of England.

The infamous Delhi Purple Sapphire, stolen from an idol in a Hindu temple, is actually an amethyst!

The ancient Persians believed a sapphire made up the pedestal that the earth rested upon. In turn, the blue sky was a reflection of the sapphire’s blue.