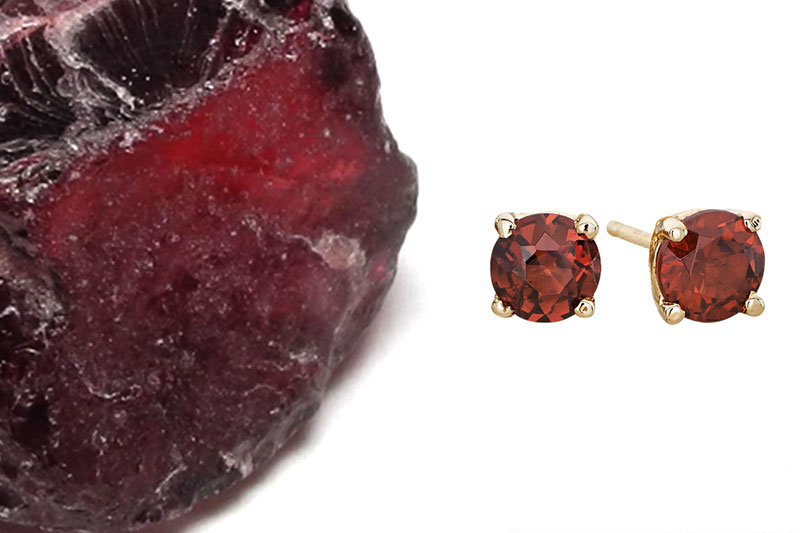 Garnets: The January Gemstone Of Many Colors & Uses

When people think of a garnet, the red January birthstone comes to mind. Garnets are so much more than the average person realizes. They are much more involved in our daily lives than anyone would think. So what makes this colored gemstone so interesting? Let’s take a look…

What Is A Garnet?

Garnets are actually a group of minerals. This not only means that there’s more than one type, but that they also come in different colors. Like a sapphire or a diamond, there is a common misconception that these stones can only be one color, but science gives each stone a variety of personalities. Fine jewelry stores, like Hamilton, are wise to this and curate pieces in garnet’s many varieties. So good news, January babies— if red isn’t your color, you can wear your birthstone in another!

Garnets are found in metamorphic rocks, which are rocks in the Earth’s crust that are altered through intense heat and pressure. Metamorphic rocks are so common that garnets can be found on every continent. The reason why red garnets are the most known is because they are the most common. The rarity of colored garnets comes down to science. Like how the element boron must be present for a diamond to become blue, garnets need certain elements to be present at the time of formation to take on different colors.

All garnets have the same essential crystal structure: X3Y2(SiO4)3.

From this equation there are two overall groups:

How Are Garnets Graded?

As the January birthstone, garnets make lovely fine jewelry. As you will have noticed in the chart above, garnets can range in durability from 6.5-7.5 on the Mohs scale. This means that there is a higher possibility of chipping or scratching on the surface. The lower durability makes grading a garnet that much more important to find the best garnet for your fine jewelry piece.

Since garnets come in a variety of colors, the idea is to grade each type based on how vivid and saturated each one is.

Vivid: A green garnet should truly be green. Not blue-green. Not yellow-green. Green.

Saturation: How light or how dark is the color? The trick is to find the happy medium.

To grade a garnet’s clarity, the first step a jeweler or gemologist must take is identifying the type of garnet. This is because the average clarity of a garnet will vary from type to type. Red garnets (almandine, pyrope, and rhodolite) usually don’t have eye-visible inclusions and need a magnifier to see any internal flaws. Other garnets, like the orange ones (spessartine and hessonite) tend to have eye-visible inclusions. As with all colored gemstones, the less inclusions there are overall the better the clarity grading will be.

Unlike emeralds, which are cut into specific shapes to better show their beauty, garnets can be cut into any standard shape to best suit a piece of fine jewelry. Depending on the quality of the garnet and the type a cut may be chosen to better retain more of the gemstone’s natural weight.

Because different garnets naturally have different densities, the grading is dependent on the type. Some types of garnets are more commonly found in smaller sizes. This makes those varieties with greater carats more valuable than those that are commonly found with larger sizes.

Whether you are looking for a birthday or anniversary gift, garnets are as unique as your special someone. Hamilton Jewelers has been curing these fascinating gemstones for over a century. Our expert representatives can help you choose the garnet color and jewelry piece style that best serves suits the recipient. Come into one of our locations to see their beauty for yourself!

How He Asked: Alisha and Donovan’s Fairytale Hamilton Engagement Story

What is the Most Popular and Average Carat Size for Engagement Rings?

Why It’s Better To Purchase From An Independent Jeweler vs. A Chain Store

Why You Might Want a Yellow Gold Engagement Ring

Hamilton Series: Tracking Down the World’s Most Infamous Diamonds – The Spirit of de Grisogono

Diamond Bracelet and Ring, Given to Elizabeth Taylor from Michael Jackson, On Display at Our Princeton and Red Bank Locations

Hamilton’s 5 Tips: How To Accessorize Your Wedding Dress With Jewelry

At Home Hacks for Cleaning Your Jewelry