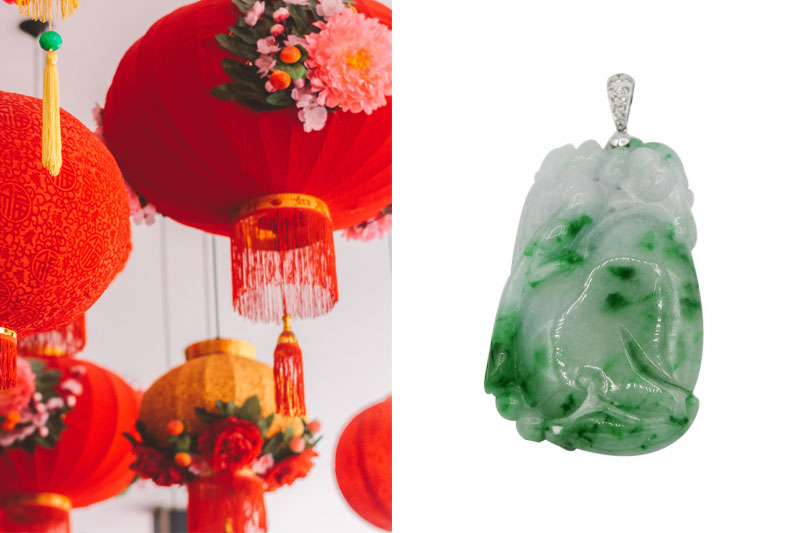 February rings in the Chinese New Year, or the Lunar New Year. According to mythology, the Jade Emperor of China called for a race, inviting all the animals to take part. As a reward for participating, each animal would have a year dedicated to it in a 12-year cycle depending on the order they finished. These twelve animals would become the Chinese Zodiac and instrumental to the culture.

Whether or not it’s your year of the Chinese Zodiac (find yours here!), you can take your cue from the culture. Give a gift fit for an emperor, one both thoughtful and exotic: fine jade jewelry.

There are actually two different materials with different chemical compositions considered jade: jadeite and nephrite. Both are most commonly found as green-hued stones, but they are known to take on other colors such as lavender, white, yellow, etc… It’s jade’s lovely green and pastel colors that make it the perfect spring accessory.

Nephrite typically comes from Western China. “Jade” and “traditional jade” typically refers to this mineral. This is because nephrite was more widely used before jadeite was imported to China. The different chemical compositions and crystal structures actually make the two a contradiction. While jadeite is denser, nephrite is actually more durable.

Jadeite comes exclusively from Burma (Myanmar). This is known as “Imperial Jade,” and it’s the more valuable of the two. It typically has an emerald-like color.

History: Why is Jade so Important in Chinese Culture?

Jade has been used in Chinese culture since about 3400BC. The nephrite was mined for its durability to make tools and weapons. Once appreciation spread for its beauty, jade transitioned into a more ceremonial role, fashioned into objects of religious and cultural significance.

But jade isn’t just a prized stone. It’s deeply rooted in the Chinese culture, even taking on a spiritual significance. Confucius said that there are eleven virtues represented in jade, including heaven, earth, truth and benevolence. The stone’s symbolism of virtue has even made its way into many Chinese idioms, making it essential to the very language. The wealthy had jewelry and even suits made from the material, and when Burma’s jadeite was discovered, it became the choice stone of royalty. Hence, the name: Imperial Jade. To this day, jade is still more valuable than gold in China.

Give the gift with a gem of virtue and strength. Give them the gem of emperors.

Come into one of Hamilton’s fine jewelry store locations to see its luster in person. We can even help you design a custom, one-of-a-kind fine jade jewelry piece.